The series of social media posts sees Trouw perform short segments of music by singing, playing drums or the keyboard, after which she uploads the WAV files to dropbox for her fans to download – allowing them to virtually collaborate with her.

The series of social media posts sees Trouw perform short segments of music by singing, playing drums or the keyboard (recorded by an OC818 and whilst wearing the Hi-X55s), after which she uploads the WAV files to dropbox for her fans to download – allowing them to virtually collaborate with her. 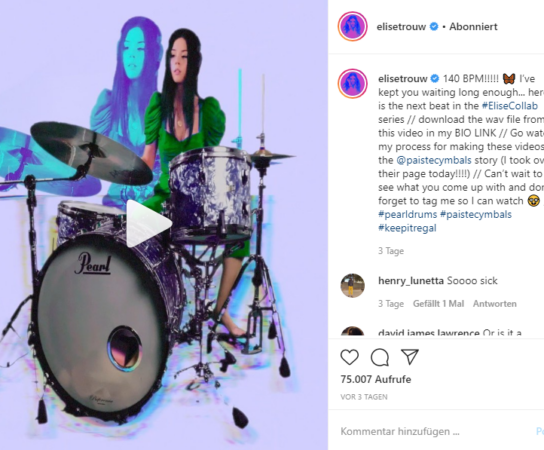 “I’ve had a love for music ever since I was really young, and over time I’ve developed that in different ways in my performance, my live looping and my songwriting. Finding a way to incorporate all of my passions and interests is what I’ve been focussed on in my career,” says Trouw.

Prior to the #EliseCollab series, Trouw was excited to try out the OC818 after hearing so much about it:

“I’m using the OC818 for some upcoming recordings; I’m really excited to see how it sounds with my voice and to try it out on the drum set.”

Trouw was born in Southern California and was raised on The Carpenters, Green Day, and 80s New Wave. Inspiration struck when a six-year-old Trouw first heard the haunting piano melody in ‘My Immortal’ by Evanescence:

“I distinctly remember a five-hour plane ride that consisted of that one song blasting repeatedly into my ears,” she says. “So I begged my parents for piano lessons, and after they finally relented, they were then begging me to not practice at five in the morning every day! I did it anyway, and my love for piano just grew stronger.”

Trouw then progressed from piano to the drums after mastering the drums to ‘Dani California’ on Expert Mode on the Xbox game, Rockband, and later enrolled in School of Rock, where she was one of the youngest pupils.

“Being one of the youngest only pushed me harder to keep up with the older kids,” she recalls. “From Mitch Mitchell’s jazz-rock waltz on Jimi Hendrix’s ‘Manic Depression,’ to the syncopated groove of Richard Bailey on Jeff Beck’s ‘Blow by Blow,’ to the funky feel of Tower of Power’s David Garibaldi, I wanted to learn it all!”

The decision to perform all of the instrumental and vocal tracks on her recordings stems from a desire to learn more about recording and to push herself beyond her own limits.

“People ask me: ‘What genre is your music?’ With songs in 5/4 and 7/4, chords that you’d normally find in The Real Book next to ‘Take Five,’ and influences like Radiohead, The Police and Steely Dan, I’m really not sure what box I fit into. I’ll leave that up to you!”